So at Wheaton Labs they encourage you to do your number one “bidness” anywhere on the property to return the nitrogen and minerals back to the environment. They also ask that you eat organic or better especially while you are on property for myriad and various reasons that you can look up on their website at permies.com. For your other functions there are multiple locations on the property that have various different types of “willow feeders”.

The concept behind the willow feeders is that willow trees and cottonwoods love excess nitrogen. After human byproducts are stored long enough to kill all the pathogens the remaining composted nutrients left behind are still too “hot” to put around most plants and most people have a natural aversion to composting in the garden with human waste (even though that was the practice in Asia for thousands of years and still is on-going but that is a discussion for another time).  Turns out however that willows and cottonwoods will take as much of that kind of stuff as possible and turn it into oxygen and wood and such.

So the “willow feeders” at the Labs are more efficient than an outhouse and I can personally attest that they don’t smell and they are very clean. I’ve probably used more out-houses and porta-potties over my lifetime than most  folks and I can tell you personally that the willow feeders are way more civilized than anything else of that nature that I have ever used.  The biggest hassle factor is having to get mostly dressed if the weather is not good to use them.

We also got to take a look at a project that was built by a couple that was staying in the tipi. Yep, you read that right, Paul has a tipi on his property that is available for rent and contains a rocket mass heater. 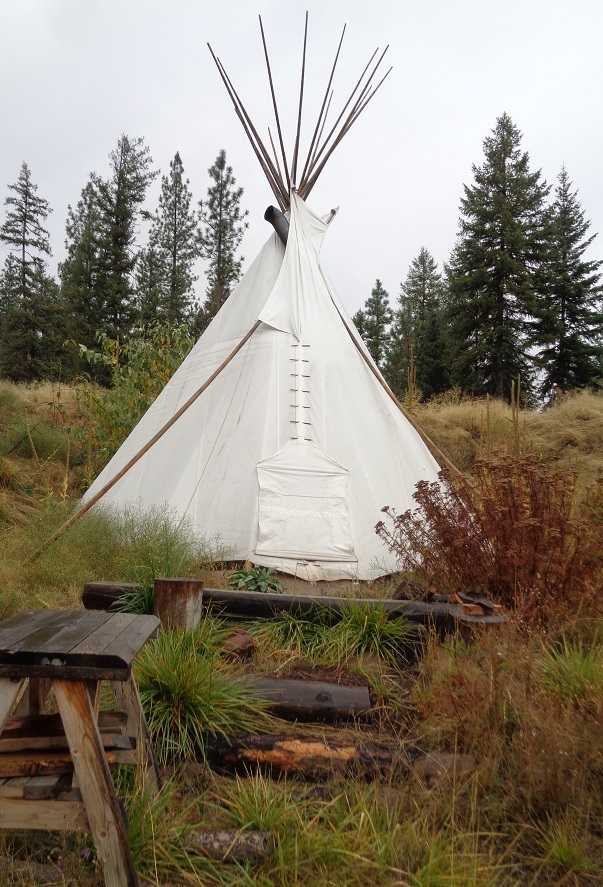 It’s a full size tipi and has a rocket mass heater and circular thermal mass bench inside. Paul told us the first year it was on a property a couple stayed in it over the winter. One morning they got up, put on their outdoor clothes, came out side and found out it was 25 degrees below zero! Inside they said they had the Rocket Mass Heater going the previous day and when they got up it felt like 50 – 55 degrees out. They were shocked by the outside temp. And that was in an uninsulated tipi with canvas walls. Pretty amazing stuff!

Anyway, while the couple was staying onsite they wanted to practice their round wood timber framing skills so in their own time they built a skiddable “bee hut”.

There are a lot of black bears in the area and black bears love honey, so they added a solar panel and an electric fence around the structure that is powerful enough to discourage bears without permanently hurting them. The straw bales you see around the hive are in preparation for the coming winter to help the bees maintain the temperature in the hive and make it easier on them. It also cuts down on the wind and the roof cuts down on the rain and snow. Bees typically maintain their hive temperature in the 90 to 95 degree range all year round so cutting down on wind, rain helps a lot.

We then moved on to the allerton abbey wofati.

Allerton Abbey was to be the primary focus of the upcoming Natural Builders week and there were some really cool people coming into work on that and I will cover that in a future post. On this day I got to fire up the Batch Box style Rocket Mass Heater that was in the abbey. It appears the trick to successfully starting any Rocket heater or stove is to start a small fire in the back to warm the heat riser and then build the fire more towards the front (batch box) or add more wood to the infeed (J-Tube) once the unit is drawing well. If you don’t, you’ll get smoke (and Paul will explain why that is bad and look at you funny).

This particular heater is built with a glass top from a regular stove so you can see the fire and uses a pyrex casserole dish lid as the fire feed door. Without a door on these style Rocket Mass Heater/Stoves they are not finished and will not operate properly – that is one of Paul’s biggest pet peeves with this style. People start building, don’t finish or build it wrong, then say “Rocket Mass Heaters don’t work”. They do work but this style build is not for the novice, so it’s recommended you do others before you tackle this type.

I will say you could see the fire through the glass cook top and it was wild to watch it burn sideways, then roll towards the center of the chamber in elongated tubes like sideways fire tornadoes. Erica Wisner explains  about Fire Science on their website and she also has a booklet called “The Art of Fire” that you can purchase that is super informative and interesting about how fire behave in various environments and conditions. I learned a lot by seeing all of the different Rocket Mass Heaters and Stoves and I am super glad I made the trip.