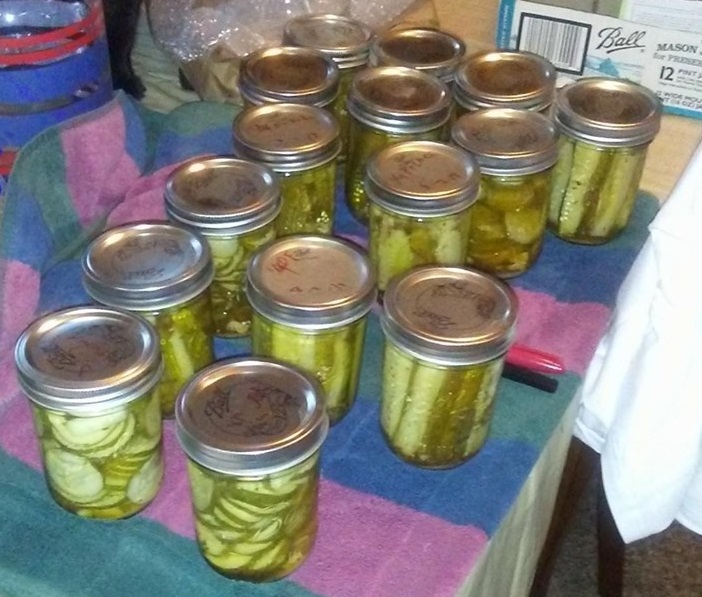 The Mad Farmer took a day off from his “real job” and was hoping to get some intensive yard work in on his “day off”. It’s said that if you want to make God laugh, tell him your plans. It apparently started raining sometime during the night. The Mad Farmer’s Strawberry Blonde Pain-in-the-Too-kas, aka the Bane of the Farmer’s Existence, aka the Dog that almost speaks English, sometimes known as … “Sasha”, usually gets the Farmer up sometime before 6 am to “go out”.

In case you are not a dog owner “go out” means “I’ve been inside, cooped up for a while and I gotta go, and I gotta go now (okay I could hold it, but now would be super swell and I’ll whine less – maybe – okay probably not, but maybe, if you would get up and let me outside NOW that would be SWELL). So the Mad Farmer stumbles out of bed, staggers down the stairs, whining mutt following, and opens the back door. Amazing what you don’t hear when you’re not really awake. Somehow the Farmer missed the pitter-patter of a torrential downpour. When the door opened, the driving rain was apparent and the sudden crack of lightning and resulting flash sent the aforementioned Strawberry Blonde hobbling backwards and up the stairs as fast as she could. It appears that safety trumps a full bladder, at least in the short term.

The point of all this exposition is that no yard work was getting done, at least not in the morning, at the Tiny Sustainable Homestead. There were still things to do even though it was raining.

Miss Mercy returned from her meeting and helped to drink the coffee, she was no help at all for napping – she doesn’t really nap (although she does try on occasion). The Strawberry Blonde was also not helpful for the napping. Turns out, if you’re not spending every waking moment paying attention to the Blonde then Little Miss Whiny whines. Super annoying if you’re trying to nap while hanging out on your porch in the rain. At that point the Farmer had a choice: He could get up, go upstairs and go to bed or, his timeline could fork, and he could get some stuff done (Future Post Warning: The Mad Farmer will at some point share his brother’s theory about naps and going back to bed) .

As much as the Farmer would love to waste a day doing nothing, it didn’t feel like today was that day, so the mental decision was made to get some stuff done. The bird feeders got filled, turned out the birds don’t care if it’s raining. The kitchen got spruced up, the fridge got cleaned out, zucchini chips got dehydrated and peppers and cucumbers got harvested from the garden. It’s been a weird year for gardening in Kansas, last year it jumped from Winter to Summer, giving Spring a miss. This year has been one of the wettest years in memory and so we actually had a Spring but Summer has been a pendulum swing between very hot and very wet – it’s really confused the garden produce. We know people who are having a bumper crop of tomatoes, the homestead has very few. The basil is going gangbusters and we have volunteer squash that have massive vines but aren’t fruiting. So all-in-all, garden confusion.

The one amazing pile of produce we have is cucumbers. Not the Mad Farmer’s favorite fruit but Miss Mercy loves ’em in all their forms. We had way more cucumbers than Miss Mercy could reasonably eat so the Farmer decided it was finally time to learn how to water bath can. A recent podcast from Nicole Sauce, at Living Free in Tennessee, about the 8 Steps to Mastering Canning, inspired the Farmer to give it a try with some cautious encouragement from Miss Mercy.

So we gathered the cucumbers and the canning supplies (the Homestead has been preparing for this for a while) and the Mad Farmer started slicing and dicing and sterilizing and sanitizing and boiling and preparing and all the other things you need to do so start canning.

Turns out it’s not that scary. The Farmer has brewed beer and mead off and on for years. The one thing in common with those processes is you want to make sure everything is clean and sanitary. If conditions are not sanitary you risk contaminating your product and screwing up all your hard work. Cucumbers are naturally high in acid so, like brewing, there isn’t anything that will grow in canned pickles that will kill you. It may skunk it up, make it so it’s not worth eating or look gross, but it won’t kill you so that’s a plus.

Some foods, like meats and soups and green beans are lower in acid content and if you don’t prepare them properly you can introduce botulism. Botulism is found in all kinds of places, the dirt in the ground, on your fingers, etc. The problem with botulism is if you introduce it into an oxygen free environment it geometrically reproduces and produces a toxin that can kill you – clearly not an outcome anyone wants while preserving food for consumption later ( Important Safety Tip Egon, don’t cross the streams and don’t allow botulism toxin to thrive in your canning process).

So all the directions were followed, ingredients were added in quantities according to recipes and accepted practices and pickle packing, lid seating and jar boiling commenced. After the proper amount of time in a big pot under a rolling boil (15 minutes for the recipe we were using) the first ever Tiny Homestead canned pickles were finished and moved from the water bath to the cooling area.

Refrigerator pickles were made at the same time (a similar process, but instead of water bath canning them you just put them in the fridge). The fridge pickles turned out great, even the Mad Farmer who previously didn’t like pickles very much, found them tasty. Common practice, as we understand it, is to let the pickles rest for a few weeks to allow the flavor of the spices and dill included to infuse them with the flavors. Going to be hard to wait that long. As the quote says ” I think this is the beginning of a beautiful friendship”.