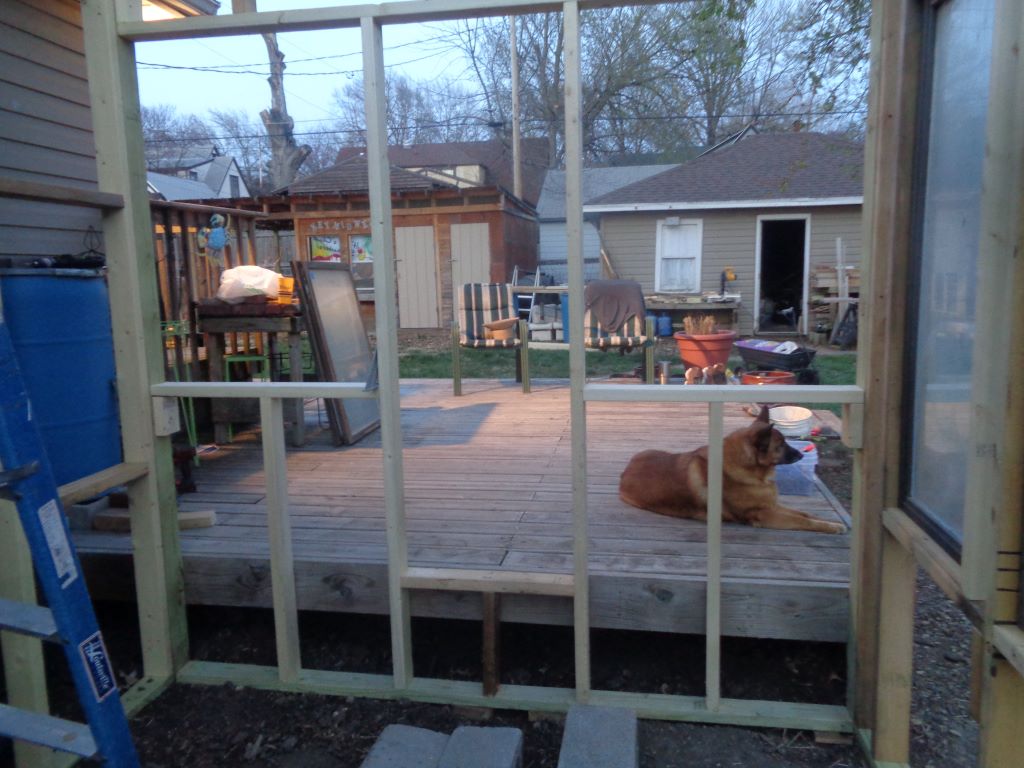 So the weather was mostly good on Easter weekend. On Saturday we started to install the re-purposed windows on the South wall of the greenhouse. I think it’s been mentioned more than once that the Farmer is a novice when it comes to fine framing. You would think the rather relaxed tolerances of a greenhouse build using recycled materials would be right up my alley – you would be close to correct. I’m sure there are super easy ways to install hinges into windows. The Renaissance Dude says there’s “a trick to it”. The Dude forgot to mention what that trick was so a good chunk of the day was spent installing four windows into the South Wall.

The windows we were using came with some hardware attached, but it was incomplete and in the end it was easier to just go to the box store and get some standard hinges. One of the interesting things about the Farmer’s builds (and possibly why the moniker “Mad” is associated with them) is that usually there is a picture in the the mind, a sketch on paper (may or may not be super detailed) and then there is the meeting of the vison and reality. It’s the last part that seems to cause the most trouble. When the planning is happening in the mind everything fits, everything is level and gravity does not seem to impact anything in any meaningful way. In reality none of those things happen the way they do in the mind.

The good news for the Farmer was that after several fits and starts the windows were finally in place and, wonder of wonders, swung open and shut like the vision in the mind. I will mention that the one area that is a constant struggle is making things too tight when framing. The Mad Farmers’ father spent a lot of time working in metal. He was a masterful welder and his projects were usually straight, clean and beautiful (we won’t mention the cussing, re-welding and sweat that went into those projects – didn’t matter when they were done). I think the reason the Elder Farmer didn’t like working in wood as much was it’s usually not straight, it warps and always seems to shift at the last minute. Which is why the Mad Farmer mostly builds with screws (more on that in future posts).

Wood has a smell that you don’t get when welding. There are folks who think using dimensional lumber is “cheating” or just prefer roundwood timber structures. The Farmer does not judge, but he does work with what is available and dimensional lumber is available in the suburban homestead world. We do try to re-use and re-purpose as much as possible and it’s very satisfying to recycle materials (also sometimes cheaper, but not always). Anyhoo, the South wall rough framing, including working windows, was finally completed.

Easter Sunday was a bright and sunny day. The Mad Farmer and Miss Mercy are Lutherans (think Catholic “lite” – if you are super interested just look up “Martin Luther” on the interwebs and you can read all about it) so Church and fellowship is important to us. We went to church (not the Sunrise Service, the Mad Farmer is not that devout apparently) and then went out to eat at the Farmer’s Mom and Step-Dad’s house. It was the first time we had seen the Homestead Daughters (weird how when children grow up they get their own lives) since Christmas and the Renaissance Dude and the Swamp Gardener were also in attendance. A good time and good food was had by all and then we returned home and went back to work on the greenhouse.

One really cool thing that did also happen on Sunday was a fellow attendee from the Jack Spirko TSP Fall Workshop that the Farmer attended in 2020 was in town and was able to drop by the TSL Homestead and spend some time. Chris (the Permaculture Architect) was in town for a family event and was able to come by and spend some time at the homestead. Chris has a blog at Alt-Ark.com. Chris is “Making Architecture More Permaculture” so please go over and take a look at his blog. It’s well worth the time you will spend.

When it was all said and done, the weekend was over and the Mad Farmer and Miss Mercy had a cognac on the Pond Deck, looked at the progress being made on the greenhouse and other projects around the homestead and were thankful to enjoy the journey that urban homesteading provides…