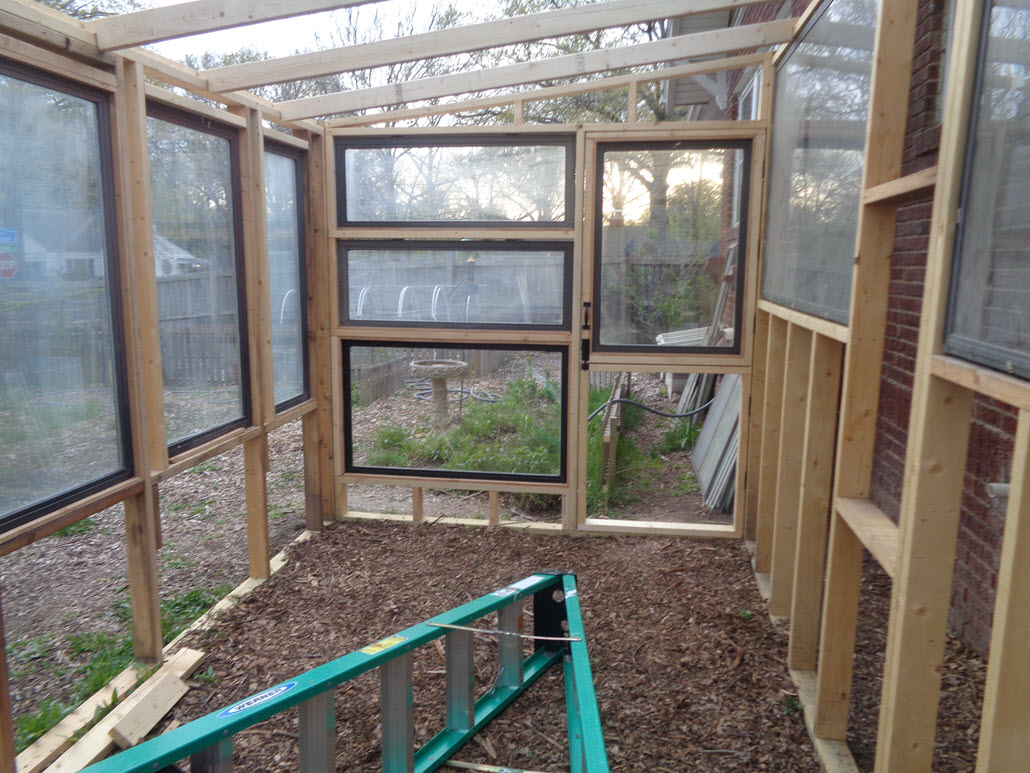 The Farmer does a lot of things with Cedar pickets – I just like the look, it’s easy to work with and since it’s usually used for fencing it’s not super expensive. On all the inside window frames the pickets have been ripped down to 1″ wide (that way there are five strips to a standard picket). Then cut to 45 degree angles on the ends, cut to the appropriate length and screwed into the 2×4’s I’m using to frame the window openings. Smells great when you’re cutting them as an added bonus.

In the above picture you can see we originally had the big window going in the top and were planning to add shelving to the lower left wall.

We ended up finding that some of the frame on the larger window we were going to put on top of the West wall had some wood rot and we could either remove the glass and build a new frame or change the plan up some. One of the reasons the Farmer likes working with wood (and the main reason I use screws) is that when a plan changes it’s relatively easy to adjust. In this case the West wall was re-framed to add in the two smaller windows on top that open horizontally and the larger window was framed in as a non-opening window on the bottom.

When we changed the window framing plan on the wall I had to remove the existing window frames I had already built, move a vertical stud over a couple of inches and then create new frame spaces for change in window layout. It’s always super handy to have a variety of clamps in various sizes and types around to hold things when you are missing that third hand. In the picture above I’m using a C-Clamp and an adjustable frame clamp to hold a new spacing stud in place while I screw it in. Way easier than trying to hold it with one hand and run a drill with the other.

Miss Mercy liked the way it turned out and was willing to lose the planned shelf space we were going to build in on the lower side of the wall. With a lower shelf planned for under the sixteen foot planting table we are building against the South wall we probably won’t miss the few feet of shelves and we gained a pretty cool look for the wall with more glass than originally planned.

Overall, a pretty productive couple of days, even with the change in plan. That’s why they call it a project…