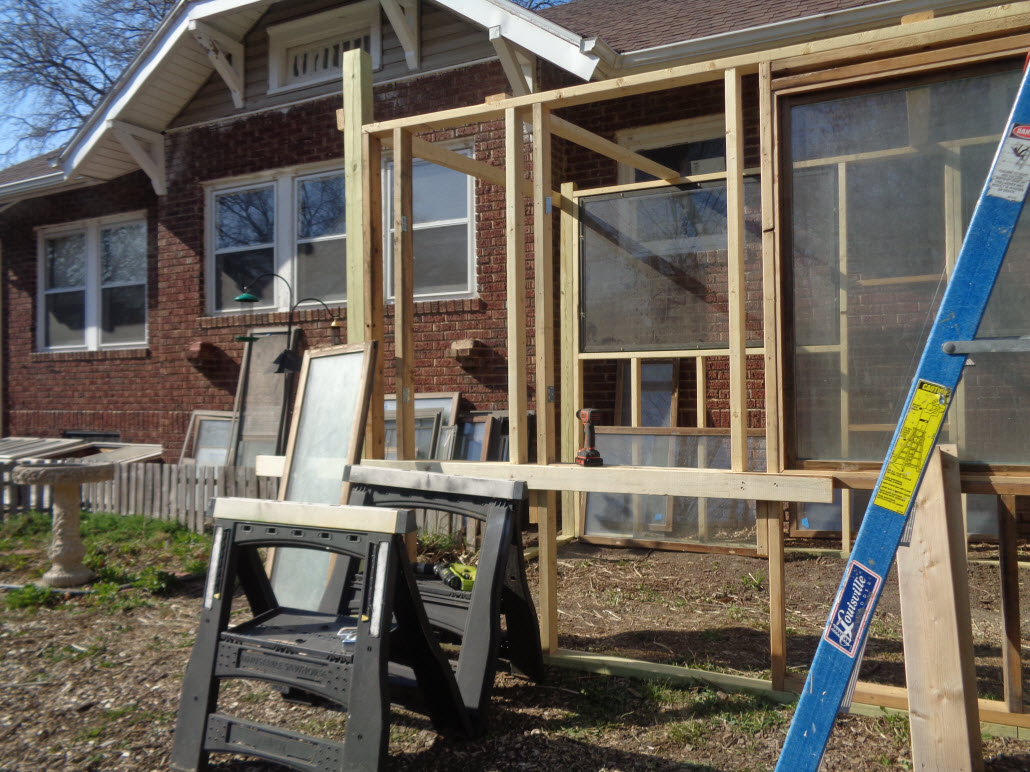 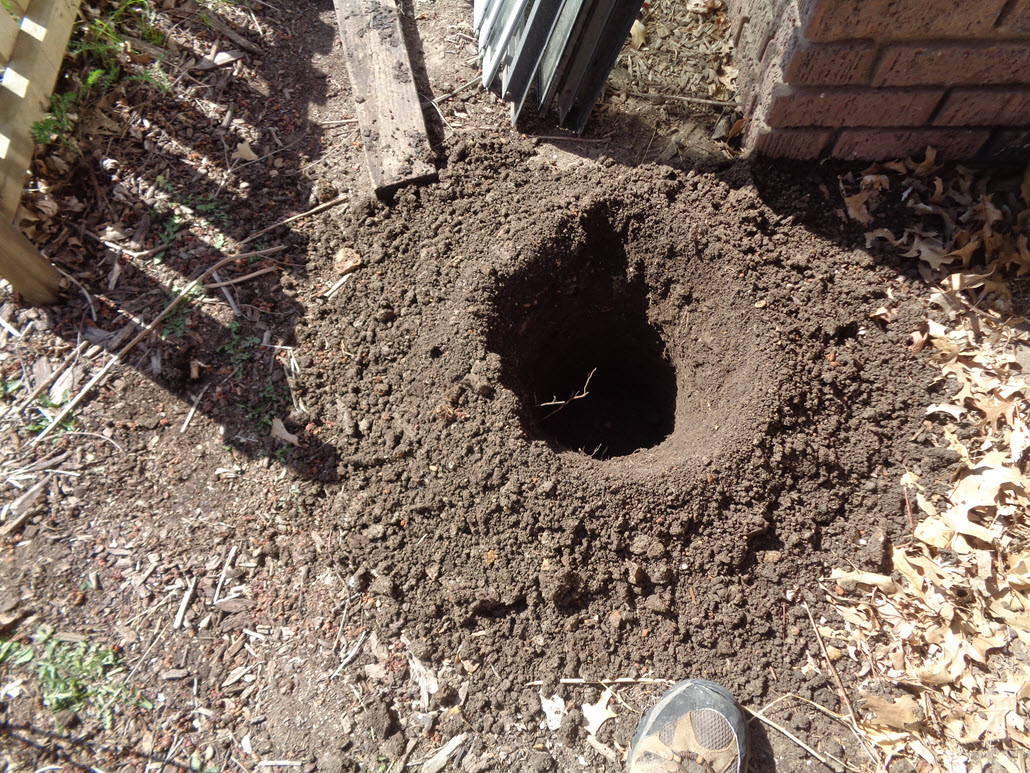 It seems like the first step in every project the Farmer gets involved with is to dig a hole. Why that is I don’t know, but I do know that there are a lot of holes that have been dug here at the homestead. The greenhouse project is no different. The Mad Farmer is a home-taught builder, learning originally how to work with wood from my father and later on mostly figuring things out as I go along. The interwebs have been a great blessing on figuring out things but there is always a difference between seeing it done and doing it yourself. I will say that pre-planning, at least a good rough draft, is always super helpful and the more planning you do up front, the smoother things seem to go.

The first step in actual construction was figuring out where the corner posts were going to be located (okay, the actual first step was a trip to the lumber place to get the posts, easier to get them first then put them in the new holes)! In our suburban location you can get by with certain size and types of structures without having to get a permit. We want the greenhouse to butt up against our deck but I can’t actually attach it or I have to go talk to the department of making you sad. So we dug the first holes so that the posts are snug up against the existing deck without actually being attached.

Various tools used in digging post holes: A spade (aka “sharpshooter”), Clamshell digger and a gas-powered auger (fun but be careful)!

I will insert a side note here – you can dig holes in a variety of ways. You can use a spade (in Kansas we call that a “sharpshooter” for reasons unknown), you can use a post hole digger – they come in several varieties, clamshell style and auger styles and probably some others, and, the best way is if your brother, the Renaissance Dude, is willing to lend you his gas powered post hole auger. For you purists out there the Farmer has dug his share of post holes over his lifetime but for sheer project momentum there is nothing like a gas powered post hole auger. Takes a minute or two in reasonably rock-free soil for each hole and man, is life sweet after that!

In Kansas the best way to set a post is dig below the frost line, set the post and then fill the hole around it with Kwik-Crete or some other type of cement. The green house is a pretty lightweight structure so we only went down about 2 1/2 feet to set the posts. Hopefully we won’t get into an extended Ice Age and come to regret not digging down the full three feet. The posts are then set in the hole and we (the Farmer’s sister, the Swamp Gardener, came by to supervise the goings-on and help out) leveled them using a post level. Pretty cool gadget that levels the post forward/backward and side-to-side at the same time. Turns out if your level is cracked on the corner (it’s a very old level) that can cause your posts to be out-of-whack until you notice. Good news, you can level a post with a regular spirit level, it just takes a little longer.

Once we got the first two posts in we then had to measure off the wall of the house and the existing deck to dig the last two holes and set those posts. With free-standing posts you do need to temporarily support them by adding braces. Once they are in place and you pour your Kwik-Crete around the base you can make minor adjustments before you add water. At this point the question was asked “How much Kwik-Crete do you use and how much water”? Good question and like most things in Permaculture the answer is “it depends”. Rough rule of thumb is 50-60 lbs. of concrete per post in a three foot depth hole. Use a little less if the hole is not as deep.

Pro tip: Don’t fill in the hole all the way to the top with concrete. Leave a few inches open below ground level so if you ever have to take a post out you can cut it off below ground and not have to dig the bottom out. After you put in the concrete just put water in the hole until it fills up. The water will seep down and mix with the concrete and eventually it will set up. Probably a more professional way to do it but I’ve never had a post fail yet so I’m okay with the “good enough” way.

That’s all there is to it except you now have to wait 10-24 hours for the concrete to set up and you can start your framing. Unless it’s Kansas and it decides to rain for another week…. 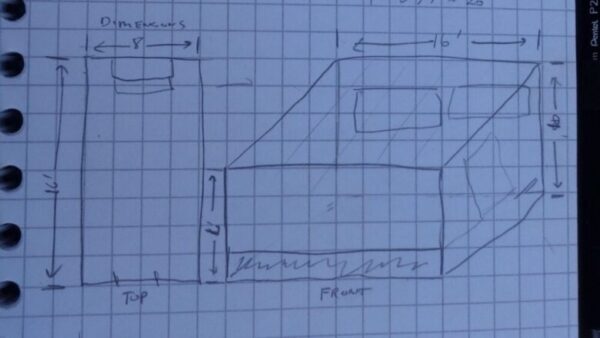 It’s almost Spring at the homestead and we have been blessed with a few days with decent weather. Less than three weeks ago it was -12F as the high with a low of -16F (for those of you on the metric system that is very, very cold). This first week of March we had 3-4 days where it was Sunny with a high of 70F and lows in the 50’s before the weather started to turn back to typical Spring and start getting rainy and gloomy and colder.

So, while the weather was nice we started to layout the greenhouse that we are building. Our house is a brick airplane-style bungalow with a long side facing South, a great place for a greenhouse. The only downside is that the kitchen windows look outside onto the yard right where we want to put the greenhouse. Never Fear – the Mad Farmer has a plan for that!

Several years back the Mad Farmer and Miss Mercy were at the Mother Earth News Fair and met Marc Plinke, the author of the “The Year-Round Solar Greenhouse”. Mr. Plinke was a physicist before designing greenhouses and is a fascinating fellow and a wealth of information. We discussed the Farmer’s proposed plans and it was pointed out that the greenhouse should not be built directly against the brick because that would trap moisture and the brick would degrade and crumble. Great information to have! So the plans changed to build the greenhouse out a couple of feet from the wall to prevent moisture problems. That also allows for a neat space to store ladders, so win-win.

Originally the plan was to build the greenhouse to 10’x17′ to take full advantage of the area from the deck to the first kick-out wall where the dining room is built, as Jack Spirko says “no one ever said I wish I had built my greenhouse smaller”. Little did we know that in the last several months that lumber prices in Kansas have almost tripled! So, rather than fight odd sizing we scaled it back slightly to 8’x16′ to take advantage of dimensional lumber. We use recycled materials whenever possible but sometimes you have to bite-the-bullet and buy some things to finish a project.

We have been collecting windows from various sources over the last couple of years after we decided to put in a greenhouse. We picked up some excellent windows from a house that the Farmer’s brother (The Renaissance Dude) is flipping, extra windows from a co-worker and a random blessing when someone in the neighborhood was removing a screened-in porch. Sadly we haven’t been able to find anyone getting rid of polycarbonate roofing…

As with most of the projects the Farmer sketched out a rough draft with dimensions. Excuse the lack of artistic ability.

Then, because we have a large deck (Mad Farmer and Miss Mercy love decks), we decided to use screws and string to define what the back and side walls of the greenhouse would look like so we we could layout the windows and see how they might fit together in the finished walls.

To our great relief we had plenty of windows and most of them will be useful. Miss Mercy oversaw the arrangements, added feedback and helped clarify where the doors will go and various and other sundry things we think about.

The farmer took a break to attend a Pantry Management webinar put on by Nicole Sauce at the Living Free in Tennessee podcast (great content, well worth the time). Through it all our fierce guard dog Sasha kept watch for nefarious critters that might interrupt the process.

By the end of the afternoon we had decided what windows go where, adjusted the dimensions, discussed materials and type of floor (probably going to end up gravel), discussed if we were going to install a Rocket Mass Heater (probably at some point – stay tuned for that) and then labeled all the windows and sketches to show where they were going, and took the screws and string off the deck (oops, missed one, found that out the hard way)!

All-in-all a pretty productive afternoon and a great way to spend a nice day after months of cold and gloom.